Once upon a time, I swore I would not be the home overrun by LEGO: too many pieces; a total barefoot walking hazard; and an edible treat for toddlers and dogs.

Nowadays, I embrace the insanity.  In a world of instant gratification, short attention spans and electronic overload, LEGO bricks reign supreme in my house.

It started with my son who once had the giant pieces, but now lives in a world of teeny LEGO bricks.  His afternoons are often spent imagining, constructing and experiencing his visions.  His sister, a loyal sidekick on her good days, takes orders, and assists in the controlled chaos to that covers the carpet of the playroom.  Little pieces are everywhere.  I often whine, “Can’t you just put away the ones you’re not using?” To which I hear that they are ALL going to be used, at some point.  And they almost always are.

What is my favorite thing about LEGO? No batteries required. No predetermined plan for what will be – all open ended, all creative challenges, all child-directed. No glowing screens, no slack jawed, glassy eyed, over stimulated kids.  Magic every time.

At our house we are surrounded with the sets that speak to my children’s’ interests: Star Wars, Ninjago, Lord of the Rings, Harry Potter, Marvel Superheroes, etc.  My daughter, who enjoys her Friends sets still asks for Ninjago themed sets, claiming to really like it, though we know she’s just trying to win points with her big brother, who she’ll recruit to build them.

My son quickly builds his sets – ridiculously quickly.  A 700-piece set on Xmas was completed between breakfast and the arrival of the extended family midday.  It’s almost a chore to be completed, and there’s no rest until it’s done.

Afterwards, however, when the original design has been dismantled, is when my son’s real skills kick in. We’ve watched the videos on the LEGO.com website that describe the engineering that goes on behind the scenes, and enjoyed seeing small models built full scale.  I see a job in my son’s future and remind him that math plays a big part here.  It’s my job to be a buzz kill, but he ignores me and asks to watch more videos, especially previews of designs yet to come.

Last year, the fourth graders were required to build a model of a monument.  Ben built Big Ben, of course, out of wood, glue and other pieces. But, before he got to the final piece, he first built a mini version out of LEGO® bricks.

So, when I heard that there would be a LEGO KidsFest (with a Master Builder Seminar, no less) within driving distance of our home, I couldn’t resist the chance to take the kids. 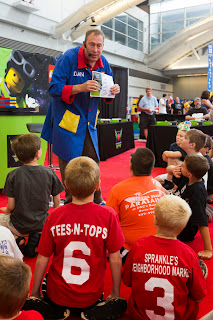 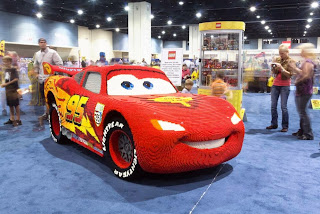 The LEGO KidsFest national tour stops at the Connecticut Convention Center in Hartford, CT, December 6-8, 2013, bringing all of the creative hands-on, minds-on fun of LEGO building and experiences together in this three acre activity- and entertainment-packed family event for children of all ages and builders of all skills and interests.

Among the many LEGO attractions, families will find:
·      LEGO Model Gallery: dozens of life-sized models made entirely from LEGO bricks
·      LEGO Master Builders: live demonstrations and activities from the crew who get paid to play
·      Creation Nation: build your own creation to add to a custom map of the U.S.
·      Race Ramps: build your own custom car, then race it down the ramp against friends and family
·      LEGO Games Arena: roll the dice to play LEGO board games
·      Construction Zones: creative free build, play and display areas
·      LEGO DUPLO®: younger visitors can explore imagination through building
·      LEGO Retail and KidsFest Marketplace: purchase LEGO merchandise and official KidsFest tour goods
·      Brick Pile: a gigantic pile full of LEGO bricks for creative play and enjoyment
·      Monochromatic Builds: bricks of a single color to foster group creativity
·      Brickscapes: fantastic displays that combine lots of LEGO and DUPLO sets
·      And much more, covering over 150,000 square feet of space

Seriously, how awesome does that sound?  I am keeping it under my hat for now, a surprise that is guaranteed to thrill the kids, especially Ben.  There’s actually a caravan of moms who are all sneaking out early that Friday afternoon to surprise our kids. I can’t wait to see them soak it all in, get new ideas, and learn from the best. 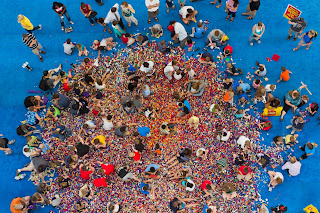 We’re so hopping obsessed with LEGO these days that we’re even surprising the kids with a trip to LEGOLAND this week. And, I just heard that there is an exhibit in NYC that is famous works of art recreated in LEGO bricks.  Who knows what we’ll discover tomorrow?

Next week, I will fill you in on our LEGOLAND adventure, and tell you how you can win your own pair of tickets to the Friday, December 6 LEGO KidsFest event!  In the meantime, follow me on Twitter to learn crazy cool facts about LEGO, and check out LEGO KidsFest on Facebook, Twitter and Pinterest. 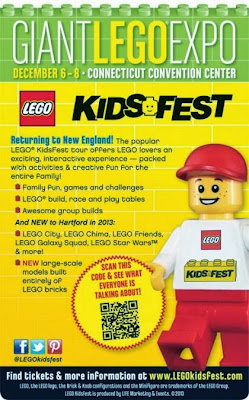 Based on sell-out attendance in previous markets, advance ticket purchase is strongly encouraged.

Five sessions – all identical – and 4 ½ hours in length are available for the Hartford December 6th – 8th tour stop.  LEGO KidsFest tickets are $20 for adults and $18 for children and can be purchased online at www.LEGOKidsFest.com.

Full disclosure, I received tickets in exchange for sharing the news about LEGO KidsFest.  My LEGO obsession, opinions and comments are always entirely my own.

Fun Fact:  You play with LEGO bricks, not LEGOS or Legos.  Write it down kids. (I did.)