The End of Innocence

Fifth grade kind of sucks.  When I was growing up, elementary school ended after sixth grade, but here, where we live, fifth marks the end of the elementary years.  And already, it’s devastating for me as a mom.
I have two children. My oldest is nearly eleven and rounding the corner to home base of this chapter in the book of life.  Meanwhile, I feel like my own version of the song American Pie is playing in the background - this is the year the music died.  The year my son will get to Oz only to find out that the Wizard is really both of his parents and magic only exists in his vast imagination.  Real life is, well, really something else.
This is the year that he is testing his Santa Claus theory.  He says that he still believes, and admits that many of his friends do not.  I get choked up every time he says it, and I have to look away.  Luckily, I have a Nana in my pocket for this one.  My mother is still a kid at heart, celebrating every holiday as though she were one of the kids.  I am quite certain she never actually ‘told’ me anything and therefore, we still proceed as though Santa really does exist.  Friends have also posted comments to my concerns by emphasizing the ‘Spirit of Christmas’ and the magic of the holiday.  I just point to The Polar Express…when you stop believing, you no longer hear the bell ring.
Don’t ask about The Elf on the Shelf.  I had to shove that little bugger in my bathrobe this morning and jam him into the Christmas tree before someone spotted us.  The webs we weave, the stories we tell, all to preserve childlike wonder and innocence.  It seems almost hypocritical, but we know the moment that the first lie is uncovered, the whole house of cards will come crashing down and everything from that moment on will be suspect.
The Tooth Fairy?  It’s only a matter of time before I forget.  The last time he lost a tooth I remembered to sneak in and leave the money but forgot to take the goods.  I scrambled to explain that the Fairy must have left it behind so he could show the dentist, since it ‘rotted’ more than fell out.  Creative?  Nah, I chalk that one up to a parenting fail.
My son is already worried about middle school.  For one thing the bus will come to our corner at 6:45 am, nearly two hours earlier than it comes now.  He doesn’t even wake up until 7:30, so this is going to be like a cold bucket of water.  And, he has to ‘find’ his classes.  I have explained that he really only has to do that once, since it’s not a scavenger hunt where the teachers hide in a new place every day.
A devout New England sports lover, Ben spends hours watching games with his dad.  Football, baseball, hockey – you name it, they’re watching it.  Have you ever caught the commercials that play in the breaks?  Viagra?  Cialis?  Or, how about the news promo that teases a story about a pedophile?  He doesn’t ask questions, but he’s not nearly as oblivious as I wish.
Girls are less awful than in years past, and suddenly everyone in the fifth grade has a ‘crush’ on someone else. If only I could freeze these moments and not have to ever get into the ‘dating’ world.  This is the year that the gym teacher will deliver the dreaded puberty talk, one that in previous years has driven boys to throw up and pass out.
He wants to know why people do bad things.  Why someone would murder someone else.  He asks me whether I would give the Boston marathon bombers any credit for what they did.  I explain the difference between famous and infamous to him and the message is reinforced when he watches Captain America, with frequent references Hitler and the Nazis.  Bad people are everywhere.
These are the days when being a guilty Catholic are not helpful.  Where trying to explain that sometimes he does bad things but that he is a very good person, with a very good soul.  Discipline has never been so cloudy. Let’s face it, as a first-born, he’s our test case.  The one we try our parenting theories out on, in the hopes of getting it right for the other one.  I am a first-born, married to a last-born.  We’re basically winging it here, as is every other parent on the planet.
Fifth grade, for my son, is the threshold between one room in his life, and another: between innocence and what lies ahead.  Honesty? Reality? Maybe.  Whatever is on the other side, I can only hope that his father and I have armed him with the grace, the wisdom and the wherewithal to manage it. Of course, he can always run to his mommy.  I’m okay with that.  I will always and forever be okay with that. 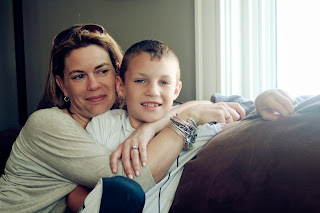