I’m not usually so motivated to write something instantly and post it.  I mostly seethe quietly.  Then I vent, reflect, write, delete, save and come back later.  Rarely do I post – once I have ‘let it go’ that’s generally enough.

But this is just getting on my very last nerve.  My son and I were playing a word game this morning and the word we were unscrambling was sexist.  He asked me what it meant and that lead to an enlightening conversation about explaining sexism to an eleven year old.

Tonight, I am randomly surfing the web and see Julie’s post: 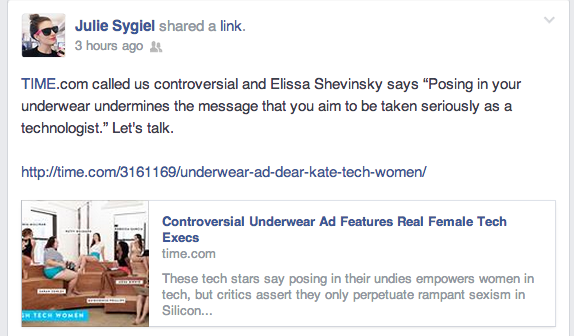 And the switch is flipped.  I can’t believe that we’re having this conversation.

You know what’s controversial?  Women not wearing underwear.  Well, maybe not even that.  Maybe what’s controversial is women who whine that women wearing underwear is setting us all back.  Is sending the wrong message.  Is suggesting something other than – HEY LOOK WORLD!  I CAN WEAR FUN AND FUNCTIONAL UNDERWEAR AND BE BRILLIANT!  I CAN WALK, AND CHEW GUM, AND FUCKING CODE THE SHIT OUT OF THIS WEBSITE!  AND YOU’RE STILL MISSING THE GODDAMNED POINT!

American culture is exhausting.  I do not envy my eight year old daughter.  I would not want to have to try to be pretty OR brilliant.  I thought we could be both.  And throw in COMFORTABLE?  Well that’s it.  All bets are off.

STOP trying to ‘make it in a man’s world’ by capitulating.  Stop being the woman who pretends that this is sexist to get INTO the club.  You don't want to be there anyway.  Stand up, in your underwear if you have the proverbial BALLS, and say, "Guess what fuckers?!  This underwear is the bomb!  And by the way, who runs the world?  Oh yeah, GIRLS."