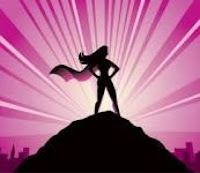 It's hot.  As I type this, I wonder if I would be so angry in January.  I suspect that I would, given the circumstances, but maybe I wouldn't be quite as 'punch someone in the throat' pissy.

I have to ask, though saying this makes it a less than family friendly post:

What in the flying fuck is going on?

Did I slip down the rabbit hole, eat the pill, drink the tonic and slide into an alternate reality?  Did I hit my head and wake up in a different decade?  Are we in an episode of Mad Men?

When the hell did the men in this country decide that they had unilateral access to my uterus?  Did they just smile politely when all those laws were passed and then send out telegrams and carrier pigeons to the group telling them to stand down, for now. Go dormant.  Remain quiet.  And await further instructions.

I feel like there have been sleeper spies here all my life and instead of getting to move this generation's young women on to bigger and better things, the men have risen up like the Cold War never ended.  Like the Berlin Wall never came down.  Like it's the Bay of Pigs all over again.

It's 2013, right?  I can vote.  I can work AND parent.  I can run for office.  I can drink, and drive, though obviously not at the same time.  But, apparently, I am too stupid to govern my own body.  I have to ask permission.  I need a congressional mandate to make a decision that is so personal, so deep, and so none of your goddamned business.

When did this happen?  Why did it happen? What did we do to earn a redo on these battles?

I distinctly remember freaking out one night during the 2012 primaries about the probes. Forced upon women. Forced. Bless my husband, who told me I was being manipulated by my party. That I was getting hysterical for nothing. That no one could or would force a woman to do that. Our kids were sleeping and I whisper screamed, "You have a wife, a mother, a daughter and three sisters!" He said I was a pawn, caught up in a political game of chess just for my vote. He's a reasonable man and no reasonable person would expect this kind of violation to be real. Oh, how I wish he was right.


I have my family.  My uterus is closed for business.  I am not planning to make any new additions that aren't furry and four legged.  So, in some way, perhaps this isn't about ME.  Except that it is.

I have a daughter.  And the last time I checked, she had rights.  She could be ANYTHING.  That's what I told her.  That's what I promise.  And no crotchety stranger has a say in her matters.

You will not interfere with my daughter's rights.  Or my nieces.  Or any young woman in this country.  And if we have to send a thousand million kajillion tweets (cause we're tech savvy and all that) until it's the only thing trending, you cannot have their rights.

It seems to me that lines are being drawn.  I didn't know we were at war, but if that's how you guys want to play it, I sure hope your wore your bulletproof briefs to work today.

If the men of this country are hoping to lead us womenfolk back into the kitchen, barefoot and happy, I hope they got rid of all the knives. 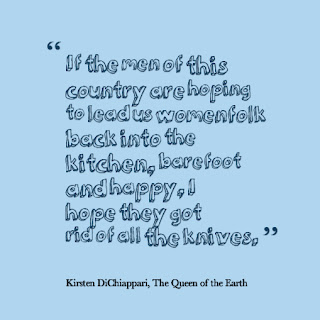 * I must qualify that there are LOTS of good men in my world.  Reasonable and honorable men.  They know who they are and I think that they're just as embarrassed about the rest of their kind as they should be.  #drawtheline
Written by tqote
Email This BlogThis! Share to Twitter Share to Facebook Share to Pinterest
Labels: #drawtheline , a few good men , congress , daughters , health , journal , men , women , women's rights
Newer Post Older Post