Daylight Saving Time…Who Are We Saving It For? 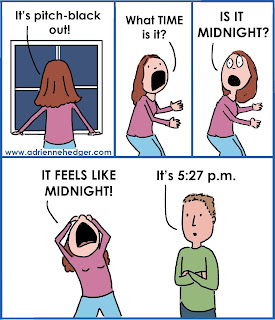 A bajillion years ago, or 1995, my friend Courtney was living in Alaska with the Jesuit Volunteer Corps.  I remember being on the phone one night while she described to me the lack of sunlight.  It was dark when she left for work in the morning and it was dark when she came home in the afternoon. In fact, the sun was only up somewhere between 10 and 2.  She never saw it during the week.  It sounded like the very definition of Hell.

That’s pretty much what it feels like for me between November and March.  I’m cold until May, but the lack of decent and lasting sunlight is death to me.  I am crabby.  I am tired.  I am foggy brained and unmotivated.  I don’t want to adult. 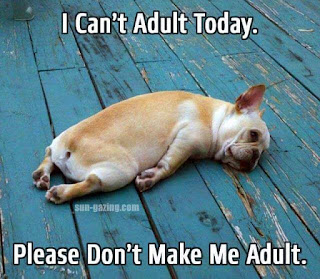 One of the kids – I think it was the girl one - suggested hibernating last week.  Her personal agenda was to avoid school, and she thought it would be a great way to skip a trimester.  I know her pain.

Research has also shown that DST, and shifts and the rupturing of sleep patterns is also linked to myocardial infarctions (a.k.a. heart-attacks), car accidents, and medical equipment malfunctions.

If I wanted an extra hour of sleep, I'd sleep for an extra hour.  I'm a goddamned grown-up. I can sleep as long as I want...as long as it's okay with my kids.  I may be bitter, but I'm justifiably bitter.  And by the looks of everyone's comments on Facebook, I'm not alone.